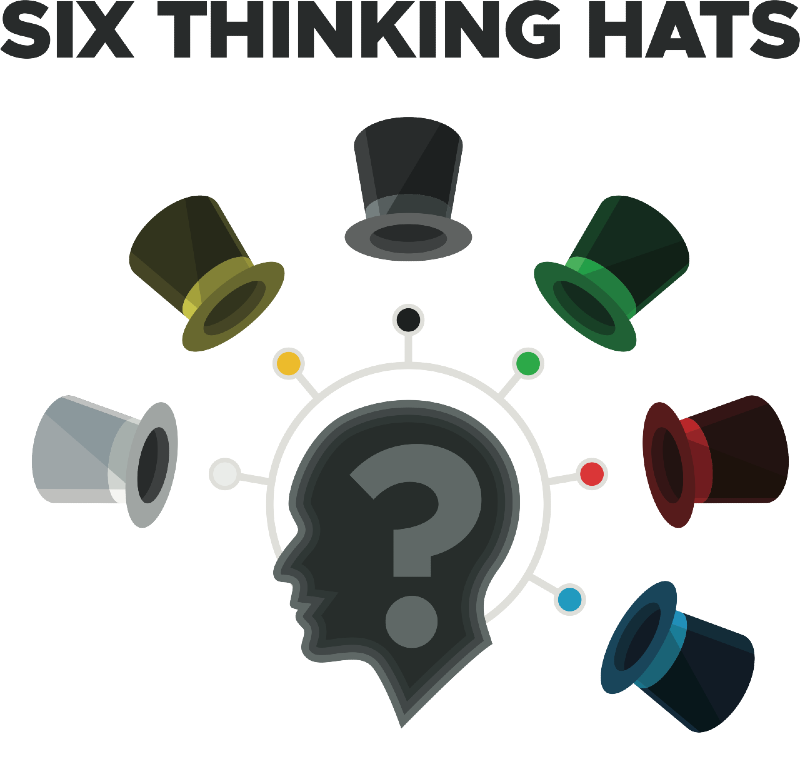 If you are choosing between two jobs or want to find a new career, it’s helpful to have good career research and decision making tools.

Here’s a simple career decision making toolkit you can put into action right away to make deciding on a career easier. It’s based on my interpretation of the famed book  titled The six thinking hats, by Dr. Edward Debono.

Six ways to help you with the career decision making process

Most of us only use one mode of thinking in the career decision process. You typically have one go-to thinking mode that you primarily use to make decisions.

The decision making theory used here is that there are six thinking modes available to you.

You can step inside of each thinking mode by role playing in one of six mindsets:

The challenge with using only one approach is that it lacks the flexibility you need to make clear career decisions. Dr. De Bono believes multiple approaches increase your chance of coming up with the best career choices.

Most of us only use one mode of thinking in the career decision process, when there are six thinking modes available to you.

In this article: How to gain powerful career research and decision making skills using DeBono’s Six Thinking Hats, we will cover

How to decide on a career using the six thinking hats

The Six Thinking Hats helps you to decide on a career renders the thinking process into 6 different role play modes.

You simply put on one ‘hat’ of that mode at a time to step into that mindset. This can give you a super clear, sharp focus in your career research and decision process:

Using the six thinking hats, you won’t just have one viewpoint, you now have a way to consider all the other factors that influence your career decision.

For example, let’s say you may predominantly focus on facts and figures, and the recruiter is pitching optimistic outcomes. He may have a job opportunity where you can quickly work your way up to a prestigious position because the CFO is retiring at the end of the year. The money is $20,000 a year less that you had hoped for to start.

Normally, you would only focus on the facts and figures in front of you. You’d perceive a mediocre salary, ok benefits and long hours and reject the offer.

But you may have missed the bigger long term opportunity.

What if you could play act other viewpoints in six thinking modes? Then you’d have a more well rounded and deeper solution, wouldn’t you?

Using the six thinking hats, you won’t just have one viewpoint.
Now you have a way to consider all the factors that influence your career decision.

The six thinking hats concept allows you to construct 6 layers that together create a  career decision making “Map” that works like a GPS.

Each thinking hat creates one layer of the map, together they plot a clear route for you to follow.

So one layer of your map is the facts and figures, one layer is the opportunities, one might be what can go wrong, one layer is your options, etc. Together, all the layers can guide your career decisions to be as clear and fully worked out as possible.

Remember that in using the six hats as a career decision tool, you are role playing. You are putting on an imaginary hat and role playing that thinking mode.

The best way to use the 6 hats is with a group of friends, colleagues or a mastermind group. Each puts on one hat and roles plays that on a decision, choice, problem or question. However I have modified it here for you to use it by yourself as well.

You will need to have some kind of recording process;

The one big rule to use this decision making process:

Each hat has established “thinking rules” that provides the hat wearer with “roles” to playact.

The one big rule is to step into one hat, and only one hat role at a time. This pulls a thinker out of their one mode mindset they may be stuck in.

This is the most powerful aspect of the 6 hats. Each hat pulls you out of your usual mindset, so you can roleplay and see other perspectives.

Takes a bit of discipline at first, but then you become proficient at it quickly.

Using the 6 thinking hats, to roleplay for each career decision:

White Hat – considers only facts and figures. Is neutral, no opinions, like a computer.

Thought Spectrum: True facts, “by and large” believed to be true

Red Hat – is engaged only in emotions and feelings. Feelings never need to be

Black Hat – is the pessimist. Focuses only on what is wrong, why it won’t work. What is incorrect. Looks for risks, dangers and faults. Spots errors in thinking procedures and processes. Negative assessment. Suspicions. Judges against the past and projects what might fail into the future. (Black hat is the opposite of Yellow Hat)

Yellow Hat – is the disciplined optimist. Sunny and positive. Constructive. “Make it happen.” What is the opportunity. What is the best outcome that can happen. Be careful, however, the goal of yellow hat thinking is ideas with value and benefit, not euphoria or Pollyanna. (Opposite of Black hat)

Thought Spectrum: from logical and practical to speculative, dreams and hopes.

Green Hat – Creative thinking. Search for alternatives, stretch for options and innovations. Go beyond the known and ordinary, beyond the obvious and satisfactory. New concepts. Move forward from an idea to reach a new idea. Provocative, to take us out of our usual patterns of thinking.

Thought Spectrum: explore from small changes or tweaks to outrageous, bizarre and outlandish, to the complete turning upside down of an idea.

Blue Hat – CEO, Conductor, Referee. Calls for use of other hats as necessary. Sets the focus, shapes the tasks to be done and questions to be asked. Responsible for summaries and conclusions. Stops argument and keeps the focus on following a map.

Blue hat comments and discussions are open to everyone/every hat wearer involved in the discussion of the issue. In case members get out of control, any or every member may put on the Blue Hat as necessary to keep discussion grounded.

The six thinking hats concept allows you to construct a “career decision making map” that works like a GPS.

Each thinking hat creates one layer of the map. Together, the six hats plot a clear route for you to follow.

The six thinking hats concept allows you to construct 6 layers that together create a  career decision making “Map” that works like a GPS.

Each thinking hat creates one layer of the map, together they plot a clear route for you to follow.

Decide what hat you will wear, one at a time

With each hat you wear (role you assume) for the exercise, decide what aspect of the career decision you will think on:

Once you put on the thinking hat you want to role play, step into it deeply!

Put on one of the hats at a time, for example the green hat. Refer to the description sheet of the green hat role: creative thinking and the search for alternatives & options

Step into only the green hat role and become that role in thinking about your decision or problem:

Go through all 5 hats except blue in this manner. You put on blue hat last.

Once all questions are answered in all five hats, then put on blue hat, which is the final arbiter that creates the career decision map.

Now you are the CEO, the referee, the judge. In this role you are responsible for summaries and conclusions. You create the map from the layers of results of all the other 5 hats.

Go through all your recorded answers and make conclusions on what the next step in your career decision should be.

Repeat as necessary until a mapped solution reveals itself.

The six hats is a very useful tool to help you find new approaches and to carefully look at all your options when you are undertaking career research and decision making.

Dr. Debono feels that the play acting between different hats is what creates their greatest value. If you can go through this process with multiple colleagues, friends or family members it can have a much more powerful perspective for you.

However I believe even casual use of the 6 thinking hats can certainly sharpen your decision making skills on your own, and bring clear thinking to complex problems.

You can use his thinking hats role play concept in any arena of your life, not just career decision making. It can expand your paradigm tremendously. 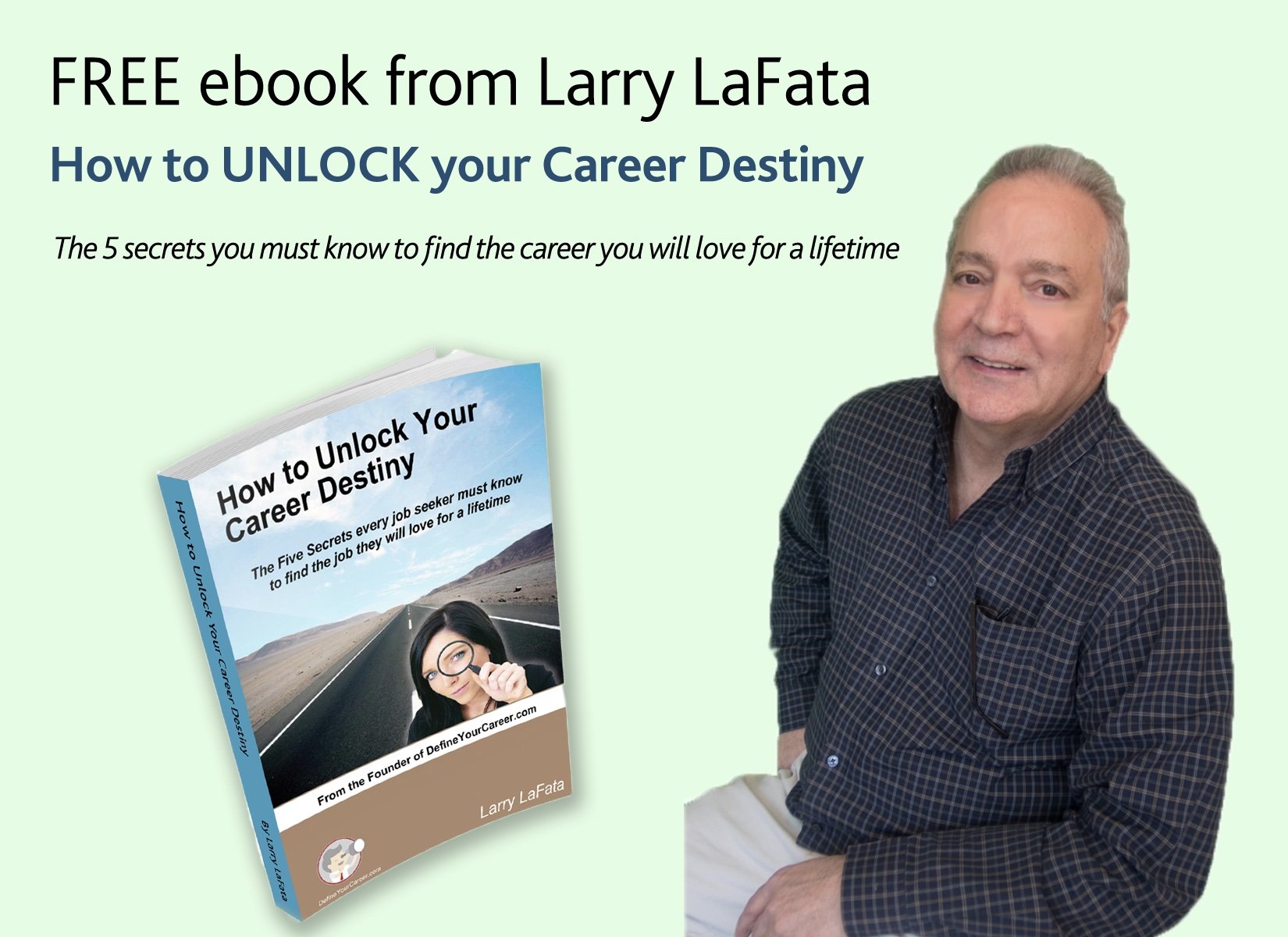 Larry LaFata is the founder of defineyourcareer.com and the world’s only Career Destiny Coach. He is dedicated to helping you discover your Career Destiny, regardless of your background, education, or experience.

Larry’s innovative courses include Define Your Career Destiny one week home study course and a two-hour Career Destiny Workshop for Friends where best friends can discover their career or business destiny together.